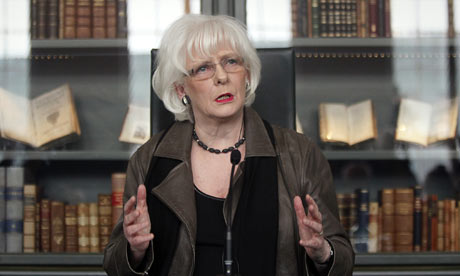 Iceland is fast becoming a world-leader in feminism. A country with a tiny population of 320,000, it is on the brink of achieving what many considered to be impossible: closing down its sex industry.

While activists in Britain battle on in an attempt to regulate lapdance clubs – the number of which has been growing at an alarming rate during the last decade – Iceland has passed a law that will result in every strip club in the country being shut down. And forget hiring a topless waitress in an attempt to get around the bar: the law, which was passed with no votes against and only two abstentions, will make it illegal for any business to profit from the nudity of its employees.

Even more impressive: the Nordic state is the first country in the world to ban stripping and lapdancing for feminist, rather than religious, reasons. Kolbrún Halldórsdóttir, the politician who first proposed the ban, firmly told the national press on Wednesday: “It is not acceptable that women or people in general are a product to be sold.” When I asked her if she thinks Iceland has become the greatest feminist country in the world, she replied: “It is certainly up there. Mainly as a result of the feminist groups putting pressure on parliamentarians. These women work 24 hours a day, seven days a week with their campaigns and it eventually filters down to all of society.”

The news is a real boost to feminists around the world, showing us that when an entire country unites behind an idea anything can happen. And it is bound to give a shot in the arm to the feminist campaign in the UK against an industry that is both a cause and a consequence of gaping inequality between men and women.

According to Icelandic police, 100 foreign women travel to the country annually to work in strip clubs. It is unclear whether the women are trafficked, but feminists say it is telling that as the stripping industry has grown, the number of Icelandic women wishing to work in it has not. Supporters of the bill say that some of the clubs are a front for prostitution – and that many of the women work there because of drug abuse and poverty rather than free choice. I have visited a strip club in Reykjavik and observed the women. None of them looked happy in their work.

So how has Iceland managed it? To start with, it has a strong women’s movement and a high number of female politicans. Almost half the parliamentarians are female and it was ranked fourth out of 130 countries on the international gender gap index (behind Norway, Finland and Sweden). All four of these Scandinavian countries have, to some degree, criminalised the purchase of sex (legislation that the UK will adopt on 1 April). “Once you break past the glass ceiling and have more than one third of female politicians,” says Halldórsdóttir, “something changes. Feminist energy seems to permeate everything.”

Johanna Sigurðardottir is Iceland’s first female and the world’s first openly lesbian head of state. Guðrún Jónsdóttir of Stígamót, an organisation based in Reykjavik that campaigns against sexual violence, says she has enjoyed the support of Sigurðardottir for their campaigns against rape and domestic violence: “Johanna is a great feminist in that she challenges the men in her party and refuses to let them oppress her.”

Then there is the fact that feminists in Iceland appear to be entirely united in opposition to prostitution, unlike the UK where heated debates rage over whether prostitution and lapdancing are empowering or degrading to women. There is also public support: the ban on commercial sexual activity is not only supported by feminists but also much of the population. A 2007 poll found that 82% of women and 57% of men support the criminalisation of paying for sex – either in brothels or lapdance clubs – and fewer than 10% of Icelanders were opposed.

Jónsdóttir says the ban could mean the death of the sex industry. “Last year we passed a law against the purchase of sex, recently introduced an action plan on trafficking of women, and now we have shut down the strip clubs. The Nordic countries are leading the way on women’s equality, recognising women as equal citizens rather than commodities for sale.”

Strip club owners are, not surprisingly, furious about the new law. One gave an interview to a local newspaper in which he likened Iceland’s approach to that of a country such as Saudi Arabia, where it is not permitted to see any part of a woman’s body in public. “I have reached the age where I’m not sure whether I want to bother with this hassle any more,” he said.

Janice Raymond, a director of Coalition Against Trafficking in Women, hopes that all sex industry profiteers feel the same way, and believes the new law will pave the way for governments in other countries to follow suit. “What a victory, not only for the Icelanders but for everyone worldwide who repudiates the sexual exploitation of women,” she says.

Jónsdóttir is confident that the law will create a change in attitudes towards women. “I guess the men of Iceland will just have to get used to the idea that women are not for sale.”

This site uses Akismet to reduce spam. Learn how your comment data is processed.